There is nothing better than a simple, fun, marching song

With the will to win: school football tournament held in the city of Voronezh 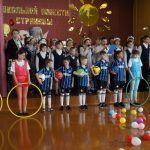 Aleksandr Zhukov, a deputy of the city Duma, congratulated Bobrovsky boarding school on its 45th anniversary
НОВОСТИ
There is nothing better than a simple, fun, marching song
Monday May 20th, 2019

The annual May amateur talent contest of songs held in Voronezh school No. 57 is always a celebration, a lively and vivid event that unites all students, teachers and parents.

The event is named in honor of Andrei Chunosov, an alumnus of thi school who heroically died in Afghanistan in 1985.
The idea of the event, organized for the first time more than ten years ago, got Aleksander Zhukov’s active support, a deputy of Voronezh City Duma, a founder and a leader of the Charity Foundation. 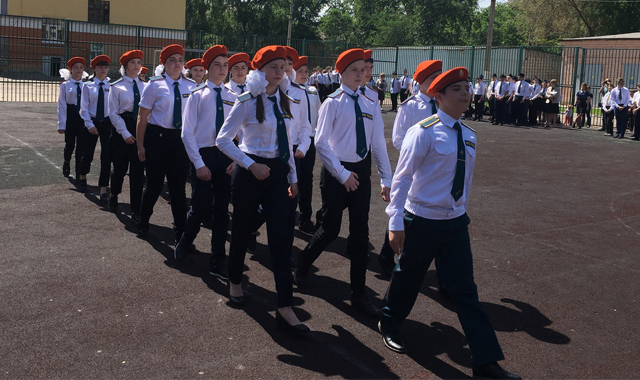 Over the years of its existence, the competition has become one of the most important and bright school events. The preparation begins almost from the beginning of the academic year, causing considerable enthusiasm, both among first-graders and high-school children. The last contest, which took place on May 17th, was so perky, joyful and bright. 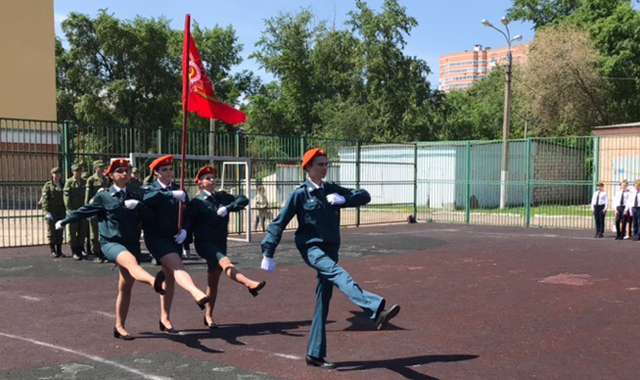 At 11 am schoolyards were filled by the slender columns of young pilots, sailors, firefighters, rescuers, scouts and paratroopers. Each squad has its own form, slogan, song and its own way of marching. The first ones on the schoolyard, in front of the audience and the jury, were squads of elementary classes marching, then middle school pupils of 5 – 8 classes. 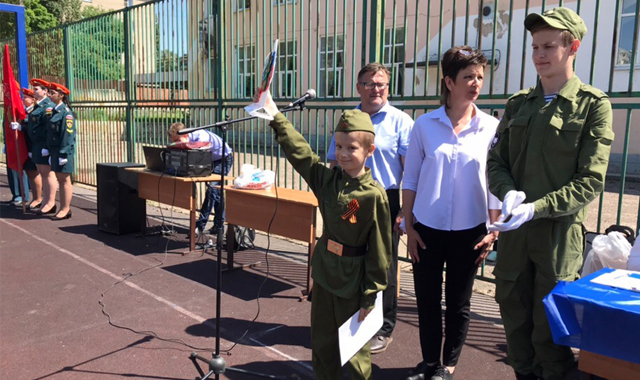 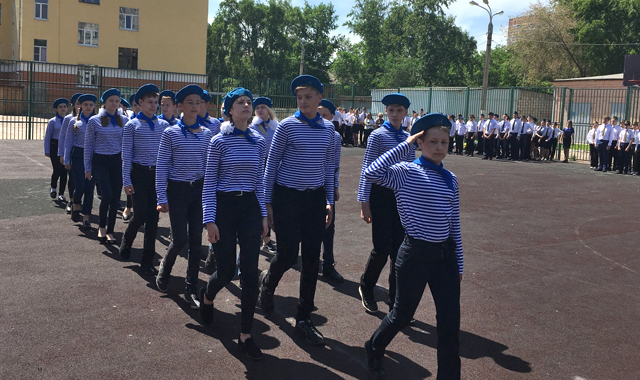 The judges evaluated the alignment and the marching clarity, the performance of the marching song, the appearance of each squad representing different types of troops. The guys with “cheers” coped with the given task, showing excellent skills of alignment, cohesion and enthusiasm – it was obvious that the majority of schoolchildren were happy being there. The jury also evaluated the commanders, the ability to report and lead the march and generally be the “face” of the squad. 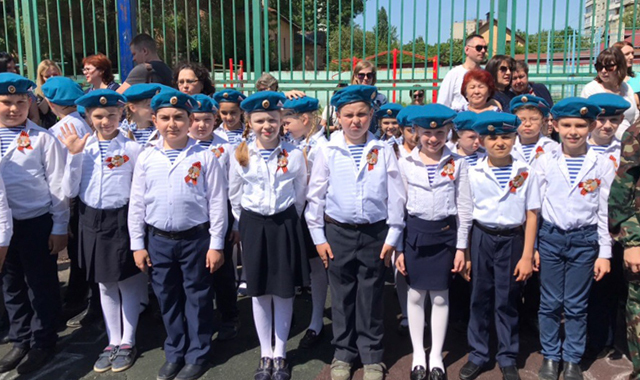 So, the best squads in performing marching songs were ones of 3 G and 5 B classes, in marching step 4 A and 6 B classes were the winners. The groups of 4 B and 5 C classes were rewarded as the best squad wearing the marching uniform. This year the best commanders were Margarita Grigorieva (class 2 B) and Karina Urazova (class 5 A). 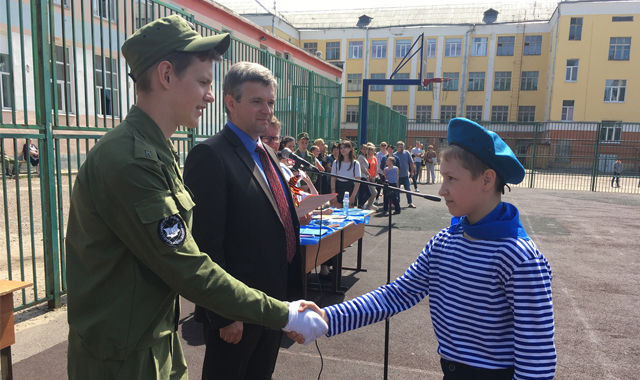 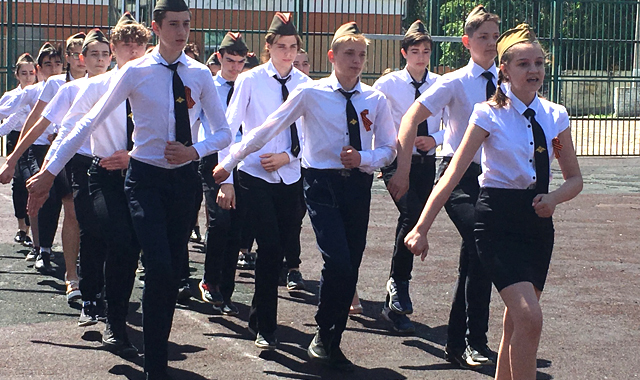 The third place in the younger group was taken by the 3 B class team, in the older one was taken by the 6 A class team. The second places were awarded to the squads of 2 B and 7 A classes. The winners of the competition were the teams of 3 B and 7 B classes, and they were the ones who got the main awards such as the rolling pennants named after the internationalist warrior Andrey Chunosov. In addition, all winners were awarded honorary diplomas and sweet gifts.

Victor V. Krivinets, a headmaster of school No. 57, told more about the event:

– The main task of the competition is the patriotic education, the preservation of the memory of the country’s history and of heroic feats including the tragic moments such as the Afghan war which was long, terrible and bloody, having claimed many lives. There were many heroes of this war, including our brother, an alumnus of our school, Andrei Chunosov.

The guys have a very serious and responsible attitude to the competition. The preparation begins two months ahead, and last month schoolchildren trained on the playground, rehearsing marching passes and songs. The competition is a very exciting event for all participants. Everyone is trying to do his/her best, and it is very difficult for the jury to choose the winners, because they want every squad win. 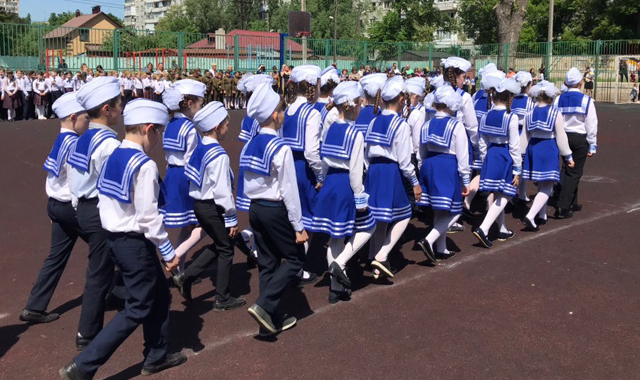 We are very grateful to the Charity Foundation “Dobrota” and its founder Aleksandr A. Zhukov for the help they have been providing since the founding of the competition. The Foundation also helps us in organizing another important event such as an annual chess tournament named after Andrei Chunosov, who was a good chess player. The best players from several Voronezh schools take part in it, and it always becomes a big event for chess amateurs. 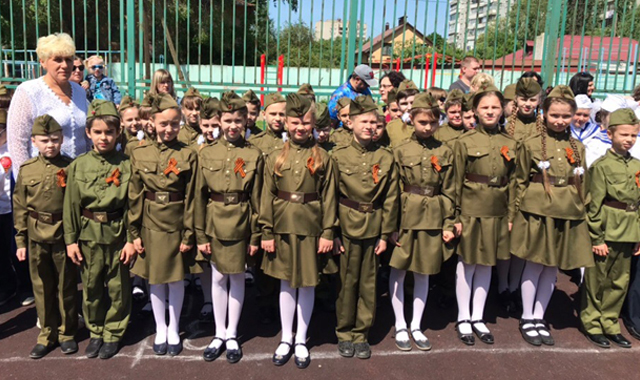 Aleksandr Zhukov, a deputy of the Voronezh City Duma, a founder and head of the Charity Foundation “Dobrota” shared his view on the meaning of importance of such events:

– The patriotic education is a priority in our work. We are trying to grow the future generation of Russia: the youth should know their roots, take care of the country, so such contests are held. We should mention not about how to show the marching uniform and perform the song beautifully but we are talking about discipline and solidarity, since these valuable qualities will help children in their future life.